We had a wonderful 12 days in Kenya, although it was a terrible shock to hear about the terrorist attack in Nairobi (which happened at the start of our second week in the country). My thoughts are with the families of those affected.

There are other worries in Kenya apart from the terrorist activities, noticeably the encroachment on the wider Maasai Mara conservancy by traditional Maasai settlements. (Unfortunately the former president, Daniel arap Moi, gave away the title deeds to the land in order to win votes.) Although it seems unlikely that the current spread of human settlement can be reversed, every effort must now be made to stop the settlement and preserve the integrity of the Reserve that remains. It is rather unsettling to see hundreds of cows grazing on the Mara grasslands and rumour has it that many of these animals belong to local rangers. However, in Samburu I toured a traditional village where the guide informed me that the villagers’ attitude to wildlife has changed in important ways. For example, in the past they would have killed lions who came close to the village, whereas nowadays they only chase them away. The reason? Tourists want to see lions and they pay handsomely for the privilege; a significant part of this money goes to the local population.

My impression is that the beautiful Kenyan reserves are in a rather precarious position, under constant threat from human settlement and with a large part of the general population apparently oblivious to the international importance of these reserves. The Kenyan government has important work to do in educating the population on the importance of conservation while keeping park fees to a reasonable level for international visitors. My hope is that the pictures we are still able to take at the moment will not just become reminders of how things used to be, but a call to action to the world at large to pull out the stops when it comes to conserving these fragile wildlife habitats and finding innovative ways for humans and wildlife to live together.

On our recent trip we stayed at four very different locations and encountered a range of wildlife and landscapes. We were fortunate to be able to witness and photograph some interesting animal behaviour, including a river crossing during the annual migration of herbivores (mainly wildebeest and zebra), a wild dog hunt, a male Somali ostrich chasing a gaggle of females, and young oryx males play-fighting in the early morning at Samburu. Over the next few weeks I will be sharing some of the pictures (both wildlife and landscapes) and stories from the trip.

As the flight from London arrived in the evening, we stayed overnight in Nairobi and drove through to the Maasai Mara directly after breakfast the next morning. It’s a long drive (about 6 hours) but there’s some spectacular scenery along the way in the form of the Great Rift Valley. After arriving at our campsite in the Mara we relaxed for an hour or so and then went for our first game drive! Below are some pictures from our first drive, and I think they show that this is a wonderful landscape and that it’s not just about the animals, although of course this is one of the best places in Africa to see some of the most amazing wildlife on the planet up close.

Our second day in the Mara brought many significant sightings, although we had to wait around for a long time for one of them.

The most significant sighting in the morning was of a beautiful African leopard called Olive. Sadly it turned out that these were some of the last photos taken of her as she was killed by lions (apparently for sport) about a week later, while we were still in Kenya. Her death is a great loss to the Mara and she will be sorely missed.

The second part of the day was all about the migration. In particular, we were keen to see and photograph at least one river crossing. Our guide tried to temper our expectations by warning that there were no guarantees that the animals would cross and that whole days of waiting are sometimes in vain. When we arrived at the river there were about 30 other safari vehicles, all with the same idea. There were large herds of wildebeest and several zebra on our side of the river, and they seemed to be working up courage to take the plunge into the river. What put them off are the crocodiles of course — we could see at least one on the opposite riverbank. Every once in a while the wildebeest would all start lining up, make their way down to the river, the safari vehicles would all start up and rush to that particular spot, the wildebeest would then decide they’re not quite ready yet, turn around and walk over to another spot along the river, and the whole waiting process would start again.

After about two hours two zebra (including a juvenile) jumped into the river and swam across. However, it turned out that the juvenile zebra had crossed without its mother, so ended up swimming back to our side! We were all holding our breath hoping he would make it back safely, and fortunately he did. We also saw animals crossing further up river from where we were, but we were too far away to get good pictures and we couldn’t get to a good position in time. We were wondering if this was going to be it, but after just over six hours of waiting the wildebeest finally worked up enough courage to brave the river and the crocs. By this time many of the other vehicles had given up so we were able to get into a good position.

We got some terrific pictures but then we struck gold: just in front of us a couple of wildebeest who had got injured in the crossing were stranded on an island. We saw a crocodile approach the stranded wildebeest and inch closer to them. Suddenly within an instant he had grabbed one of the wildebeest by the nape of the neck and from that point the wildebeest’s fate was sealed. The croc dragged the poor animal into the river and drowned it. After that we felt sad for the wildebeest but elated that we had caught some of this iconic animal behaviour on “film”. It had been a long six hours but worth every second of waiting. We decided to see if we could see anything else before it was time to head back to camp and we were fortunate to find a couple of lions and a mother elephant with her calf. All in all an absolutely amazing day!

Lion Couple Sleeping Back to Back, Maasai Mara, Kenya

Day 3 in the Mara was really special. It was one of those days that reminded me how privileged we are to be able to experience landscapes, environments and wildlife like these.

Although one of the highlights of the day — and of the whole trip — was spending a good hour and a half with a lioness and her two cubs, there were also many other treasures all through the day. We started off with a large herd of elephants, then moved on to three Bateleur eagles grooming each other, then some impala males allogrooming and then, by a riverbank, came across a pied kingfisher who had caught a frog. The frog was still alive and the kingfisher was hitting the poor thing against a tree branch repeatedly in an attempt to get it unconscious and ease its passage down the bird’s gullet; just to prove that Nature isn’t all romantic sunsets …

We spotted several other wonderful birds on the day: a marabou stork (not pretty birds but impressive in a beaky kind of way), a beautiful lilac-breasted roller, a goliath heron walking in a river, a secretary bird hunting (a rather comical sight with lots of sudden stomping), a splendid juvenile martial eagle and three grey-backed fiscal shrikes (who are easy to identify as they have a black band across their eyes which makes them look like bandits!).

And of course it was a brilliant day for big cats with several lion spottings and our first cheetah of the trip, although the latter turned out to be a rather fleeting glimpse. But the highlight here was definitely the lioness with the two little cubs. They acted like playful kittens (although the size of their paws even at this tender age is a warning sign to antelope everywhere!), with play-fighting, snarling, clawing, and climbing over each other and their mother. The lioness took it all in good grace and was very affectionate to the little cubs — keeping them entertained for a whole day must be rather hard work!

The day ended almost as it had begun: with a herd of buffalo under an African sunset. It doesn’t get much better than that!

On Day 4 we set off from the Mara to visit two of the Great Lakes: Lake Baringo and Lake Bogoria. Usually one is met here with one of the world’s great sights: millions of flamingos feeding on the algae in the rich shallow waters of the Lakes. Unfortunately due to the interminable heavy rains earlier in the year the Lakes had been flooded, with the result that many flamingos had (sadly) either died or moved away. It seemed that climate change had reared its ugly head in Kenya.

Nevertheless this part of the trip delivered several highlights and there were still many wonderful sights to be photographed. In particular the opportunity to photograph a baited fish eagle capturing a fish from the water near us was very special. So too was the chance to get really close to a juvenile crocodile feeding in Lake Baringo, as well as many hundreds of lesser flamingos on Lake Bagoria. And of course there were many other wonderful birds found around both lakes, which made us all wish even more that the water levels would return to “normal” soon. 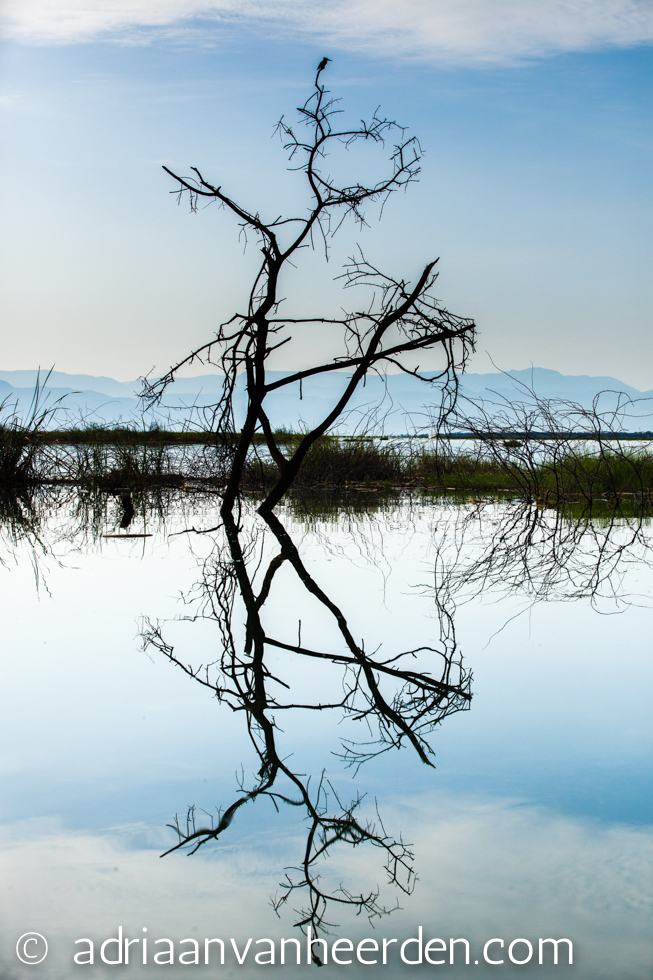